Fred Stenson is a novelist, non-fiction writer and film writer (born at Pincher Creek, Alberta). Stenson was raised in ranching country near Twin Butte, AB, and attended school in Pincher Creek. He has a BA from the University of Calgary. He published his first novel, Lonesome Hero, in 1974 (Macmillan of Canada). Last One Home followed in 1988. Stenson’s third novel, The Trade (2000), is a richly imagined recreation of the fur trade in western North America. It was the first of a trilogy of novels set in the 19th century Canadian west. The second of these novels, Lightning (2003), featured the cattle frontiers of Alberta and Montana. Both The Trade and Lightning won the Grant MacEwan’s Author’s Prize. The Trade was a finalist for the prestigious GILLER Prize and was nominated for the IMPAC Dublin Award. The final novel in this historical trilogy is The Great Karoo, in which western Canadian cowboys sought an end-of-century adventure in South Africa’s Boer War. In his three historical novels, Stenson simultaneously mythologizes and demythologizes the West. He focuses on the lives of ordinary people, the fringe players of history, leaving the larger legends, big ranchers and political personalities to others. Before turning to historical fiction, Stenson wrote several works of fiction set in rural and urban western Canadian contemporary settings: Lonesome Hero (novel, 1974), Last One Home (novel, 1988), Working Without a Laugh Track (short fiction, 1990), and Teeth (short fiction, 1994). Stenson’s numerous non-fiction works include The Story of Calgary (1994), RCMP: The March West (1999), The Last Stack (2000), Glenbow Provincial Park (2012) and Rotary in Calgary (2014). Thing Feigned or Imagined (2002) is a guide to the writing of fiction, published by The Banff Centre Press. Stenson is the author of more than 150 film and video scripts, including two seasons of the documentary series World of Horses (first aired by Discovery Canada). He has edited two collections of Alberta writing, Alberta Bound (1986) and The Road Home (1992). Stenson was a founding member of the Writer’s Guild of Alberta, serving as its president in 1996. He has been on the council of The Writers’ Union of Canada three times. Since 2001 he has been director of the Wired Writing Studio at the Banff Centre, which ended in 2016. He has been the humor columnist for Alberta Views Magazine since its inception in 1999.

I first heard of Fred Stenson and his writing when I was working in bookstores in Calgary. A book Fred had edited, Alberta Bound, was launched to great fanfare at an event held in 1986 at Sandpiper Books, and I was thrilled that so many of the contributors – some of the top authors in the province at the time, attended that evening! Now, some 30 years or so later, I look over that list of contributors and realize that I’ve promoted a number of the authors during my book career, a few have since died, and a couple became friends. (Shirley Black, were you at this launch party???) 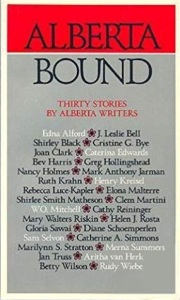 Over the decades since that book was published I’ve known Fred through his own writing, mainly the novels, and also because he was living in Cochrane where, when I was repping for publishers, I paid regular visits to one of my more “interesting” bookstore clients, George Parry at Westlands. Fred was a regular at the coffee shop next door, and everyone in Cochrane knew everyone else at that time. Fred was also a friend of another sales rep I’d known since I first began selling books, Greg Gerrard (whose photo of Fred is above). This business is so intertwined!

It wasn’t until much later, when I returned to Calgary as an Alberta sales rep once again in 2008, that I actually repped any of Fred’s books, and then it was only for a reprint of his novel, The Trade. In the meantime, I had been taking online writing courses and Fred Stenson had written what I thought was one of the most useful books on writing I’d read, and one that will always remain in my personal library, Thing Feigned or Imagined. This blurb says it all: “Somebody commissioned to design the perfect writing mentor would probably come back with Fred Stenson. Stenson is wise, funny, and blessedly enthusiastic about the craft of writing. This is a book real writers are going to use, again and again.” And that is so very true! 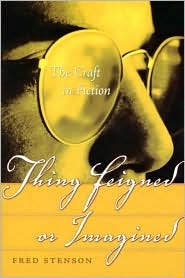 During that same time, Fred Stenson was a faculty member at The Banff Centre where he was the director of the Wired Writing Studio for eleven years. And he continued to write his own fiction, and commissioned non-fiction, to great acclaim.

Fred Stenson’s most recent novel is Who By Fire (Doubleday Canada, 2014). It is the story of a southern Alberta farm family who suddenly have a dangerous gas plant on their doorstep. The only son in this family pursues a career in the oil industry, a career that ends in the present day Alberta oil sands. It is a story of community and industry, and the tragedy of lives lived too close to industry’s fire. But it is also a novel about loyalty: what loyalty means in a family, a community, a corporation, a country—or in the tormented mind of one individual who feels he has betrayed his own.
Ella Ryder has never known another home. Her three children are growing up in the same house as she was born in. Suddenly, that is a very dangerous place to be. From the award-winning, bestselling author of The Trade, Lightning and The Great Karoo, comes a powerful, passionate novel about two generations of a family caught in the path of progress.

Who by Fire is a novel of rare emotional depth and profound resonance. With unflinching truthfulness and precise detail, Fred Stenson portrays the crunching impacts between people and industry, of lives left twisting in the winds of change.

One more of Fred Stenson’s novels I’d like to mention here is The Great Karoo, because although it’s again based on Canadian history, there’s also an international aspect to it, as part of it takes place in South Africa during the Boer War. “The Great Karoo begins in 1899, as the British are trying to wrest control of the riches of South Africa from the Boers, the Dutch farmers who claimed the land. The Boers have turned out to be more resilient than expected, so the British have sent a call to arms to their colonies — and an a great number of men from the Canadian prairies answer the call and join the Canadian Mounted Rifles: a unit in which they can use their own beloved horses. They assume their horses will be able to handle the desert terrain of the Great Karoo as readily as the plains of their homeland. Frank Adams, a cowboy from Pincher Creek, joins the Rifles, along with other young men from the ranches and towns nearby — a mix of cowboys and mounted policeman, who, for whatever reason, feel a desire to fight for the Empire in this far-off war.” Another piece of Canadian history that, to me, had been previously unknown.

What Fred Stenson is working on now: “Right now I’m buried in work on a documentary film, I am still a humour columnist at Alberta Views Magazine, and I’m looking forward to getting back to my fiction when the film work is done.”

For more information about Fred Stenson, please see his website.

Fred Stenson has also been a guest on my blog Reading Recommendations in Sept. 2014.