By islandeditions on December 4, 2019 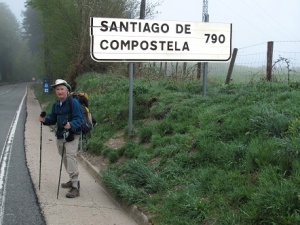 Timothy L. Phillips, went from hospitality to healing, managing luxury hotels and restaurants in London, Paris, Vancouver and Toronto before entering the healing profession in 1994 as a shiatsu and massage therapist. Through walking the Camino several times, he has gained precious insight about his own inner journey as well as bearing witness to the journeys of others. He lives in Toronto with Patricia, his life partner.

Timothy L. Phillips was my sister’s shiatsu therapist in Toronto during the early 00s, and that’s how Tim and I met. She told me Tim had walked the Camino de Santiago and wanted to put together a collection of his photographs of his trip in book form. Would I be able to help him with that? I loved the quality of his photos and discovered he had already begun writing about his trip, so we talked over the idea of me ePublishing My Camino Walk: A Way to Healing under the IslandCatEditions imprint, and that was released in May, 2016. In late 2017, Tim decided to pursue print-on-demand, as he’d been receiving requests for a print edition. This new edition also included a section of Tim’s photos he took during his walk. Actually, his “several” walks, as he’s done this now a number of times. Anyway, I’m very pleased to have been part of Tim’s “journey” in producing this book!

Timothy Phillips celebrated his sixtieth birthday by hiking Spain’s Camino de Santiago. The almost eight hundred kilometer trek became a month-long test of physical stamina, with weather extremes, a range of fellow pilgrims, and hours of introspection that caused him to question his childhood, his life, and many long-held ideas and beliefs. These challenges shook loose the very foundations of his being. Timothy brings a photographer’s eye to detailed descriptions of the trek that appeal to all the senses and invites the reader to join him on his healing journey.

The record of a journey through a mythic landscape is a staple of world literature. In My Camino Walk Timothy L. Phillips describes his personal journey across the rugged terrain between France and Spain. Along the trail, he meets an international cast of characters, each drawn with the same precision as his exquisite landscape writing. My Camino Walk is a journey his readers will share and treasure forever.
~ J. Michael Fay, author of Tenderness and other stories. 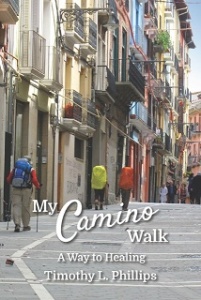 For more information about Timothy Phillips, his travels, photos, and his book, please see his website: Camino de Tim

For information on where to purchase, please check out the listing on the IslandCatEditions website.

Tim also wants to share some rather exciting news with readers!

Timothy Phillips will be presenting at the Edinburgh Festival Fringe a 45-minute one-man play entitled My Camino Walk – A Way to Healing (published by IslandCatEditions) based on his book of the same title. It will run between August 7th and August 22nd, 2020, at the Space @ Surgeon’s Hall, Venue 45.

The multi-media production will include photographs from Tim’s several walks of the Camino, with songs performed by Juno-nominated pianist/vocalist Patricia Silver.

The Edinburgh Festival Fringe, Scotland, is the world’s largest arts festival, which in 2018 spanned 25 days and featured more than 55,000 performances of 3,548 different shows in 317 venues.