Born in Golden, BC, Marina Endicott grew up in Nova Scotia and Toronto. She began her career as an actor and director in Ontario and England, where in the gaps in work she began to write fiction. Back from London, she went west to Saskatoon to work in theatre, mostly in new play development as a director and dramaturge, before going farther west to Mayerthorpe, Alberta, for her husband’s first posting with the RCMP. Her first book, Open Arms, was short-listed for the Amazon First Novel Award. Her second, Good to a Fault, a finalist for the 2008 Giller Prize and a CBC Canada Reads choice, won the Commonwealth Writers Prize (Best Book, Canada/Caribbean). The Little Shadows, shortlisted for the Governor General’s Award, and longlisted for the 2011 Giller Prize, as was Close to Hugh, one of CBC’s Best Books of 2015. Her new novel, The Difference, the story of a voyage to the South Seas in 1911, will be published by W.W. Norton in the US in June 2020.

I was the sales rep for a brand new Calgary literary publisher, Freehand Books, that hit the scene in 2008, and it was my great good fortune to be selling that first list, which included Marina Endicott’s second novel Good to a Fault. Not only were the publisher and author situated in (or nearby) my home base of Calgary, but the book was – and still remains – one of the very best novels I have ever read! And not only I thought this, but so did many other readers, booksellers and librarians across Canada! To say that this book was a pleasure to sell and Marina a wonderfully responsive author to represent is putting it mildly. (I’ve had great pleasure again just now putting together this promo and reminiscing about those heady days of selling this terrific book!) But don’t just take my word for it; look at all the nominations and awards the book garnered and the glowing review in Alberta Views Magazine written by Aritha van Herk (who I promoted earlier as part of this A-RI series):

Good to a Fault

“Most of all, Good to a Fault lays bare the dread cloak of poverty, how it clings, leaving a trace as indelible as ink. The “whole dirty business of being human” is a challenge to all. And rising to the challenge of doing good, not out of selfish need but generosity, is even greater. The incipient tenderness of this novel makes it at times movingly difficult to read, but that tenderness also makes it compelling. In an age of slick and clever writing, substanceless as air, Good to a Fault incites tears. They are tears of pleasure, for a good story and for such good writing.”
— Aritha van Herk, ALBERTA VIEWS

I have been a fan of Marina Endicott’s writing ever since first reading Good to a Fault, and have very much enjoyed all the books she’s written and published before and since. This is what good writing is all about, readers!

Up from underneath came a blue-black swell, rising in a long arc. Kay waited, hovering in the difference between herself and the whale.

On the Morning Light, a three-masted barque from Nova Scotia sailing the trade winds to the South Pacific in 1911, young Kay feels herself not wanted on her sister’s long-postponed honeymoon voyage. But Thea will not abandon her young sister, so Kay too embarks on a life-changing voyage to the other side of the world.

“It’s 1912, and just off the Pacific island of Pulo Anna, a group of men have rowed out to a Nova Scotia merchant ship to trade with the crew. The exchange involves the sale of a young boy by his people to the captain’s wife, Thea – the pivot around which this extraordinary novel turns.”

The adventure of life at sea has distractions and consolations, and as they traverse the globe, stopping at the various ports of call on the way to China, Kay finds herself perplexed by questions: is there a difference between ourselves and other humans? Between human and animal? How can we eradicate that persistent, illusory difference from our deepest and least conscious minds?

Lovely in its graveness, and in its comedy. The cut of the prose is so keen and the happenings are so finely wrought that it contorts where it can’t help but contort, around the places where unanswerable grief comes into our lives.

At the heart of The Difference is a crystallizing moment in Micronesia: forming a sudden bond with a young boy from a remote island, Thea takes him away as her son. The repercussions of this act force Kay, who considers the boy her brother, to examine her own assumptions—increasingly at odds with those of society around her—about what is forgivable, and what is right.

Inspired by the true story of a Yarmouth woman who bought a little boy in the South Seas, The Difference shows us a now-vanished world in all its wonder—and in its darkness, prejudice and difficulty, too. Endicott brilliantly illuminates our present time through young Kay’s contemplation of the idea of “difference” between languages, people, classes, continents, cultures, customs and species. The Difference is a breathtaking novel by a writer with an astonishing ability to bring past worlds vividly to life while revealing the moral complexity of our own. 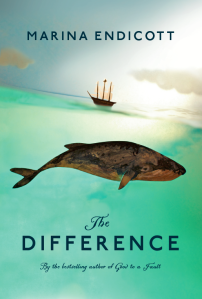 For more information about Marina Endicott, her books, writing, and editing services, please see her website.