This is a continuation of an earlier blogpost from the summer, Dedicated Reading … My New TBR List: Part 1

Paul Quarrington is next on my list. An actual mentor to me, Quarrington was the author I worked with when I was enrolled (online) in the Humber School of Creative Writing. He was an award-winning novelist, playwright, screenwriter, filmmaker, musician and writing instructor. At the time he died, I discovered he was one month younger than me – he was so accomplished, and here I was, really just starting out, flexing my own creative muscles. I wrote a tribute to Quarrington on my blog. I have paperback copies of seven of his novels, and was going to begin by reading Whale Music (which had also been made into a movie), but then I noticed the hardcover copy of Cigar Box Banjo: Notes on Music and Life that was published posthumously in 2010 by Greystone Books – who I had repped for many years. And, when I opened the book to have a better look, I discovered there is a CD/DVD attached to the back cover containing three songs and two videos by Quarrington … Bonus! So I’ll add that CD to my stack for background music while reading the novel. (I do have a copy of Quarrington‘s final CD, The Songs, but that’s in my CD library on Bequia.)

David Poulsen is an author I first met in 1993 when I was repping for Red Deer College Press and they published his novel Don’t Fence Me In, A Romance of the New West. (I have reminded Dave that we were among the few who remained relatively unscathed after working with publisher Dennis Johnson … Aritha (below) is another of those fortunate “few.”) Poulsen has not only written many books for teens and adults over the decades, but has also been an actor, TV presenter, rock singer, college instructor, high school football coach, bareback rider, rodeo clown – and an award-winning Professional Rodeo Announcer! He has served a number of times as writer-in-residence for various libraries, and is quite capable of encouraging readers, especially that difficult group of reluctant readers – teenage boys! – to get all fired up about reading books. It’s David’s enthusiasm for writing and telling a great story that attracts readers. For this reader, however, it’s also his great sense of humour and humility that comes through. I only have three print books in my library by David Poulsen (one of which is The Cowboy Country Cookbook, co-written with Barb Poulsen and Lauren Hitchner and also published by Red Deer Collge Press), but I have read many of his other titles borrowed from libraries either online as eBooks or in print editions. Here’s a video I found on YouTube about David’s career as a rodeo announcer, so I’ll let him tell you all about himself!

And when I was publishing my second novel, One Woman’s Island, David Poulsen did me the honour of providing a blurb for the back cover!

Next up is an author who may not be known outside Canada as well as I think he should be. Guy Vanderhaeghe is from Saskatchewan and began publishing after I had moved west, so I certainly knew of him and his writing early on. And his writing is superb! Any new book by Vanderhaeghe is an event, as far as I’m concerned, and worthy of being bought in a hardcover edition to add to my library. Possibly his best-known novel is The Englishman’s Boy, published in 1996. The edition I have was packed up to go with us to Bequia, so was on my shelf there, when a friend came looking for a book to lend to his American friend to read while he sat in Her Majesty’s Prison in Kingstown awaiting a murder trial. (This was a celebrated case at the time, which you may read about here.) My friend took the book and returned it a few weeks later, complete with a hand-written review on an inside page – and a “Censored” stamp from the prison! When I had the opportunity to meet Vanderhaeghe in Banff a number of years later, I took all my books for him to sign, and gave him a copy of this page … His reaction was cautiously amused. 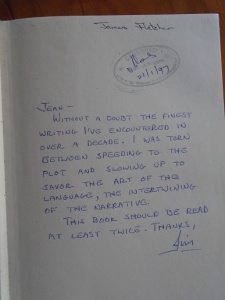 I will be rereading Vanderhaeghe’s second book, My Present Age, published in 1984 and nominated for the Booker Prize that year.

Aritha van Herk should need no introduction! I’ve written about this author before on this blog (a post in which I explain how I know Aritha) and she also recommended the author George Melnyk on my Reading Recommendations blog. She continues to be an inspiration to me, and I’m especially grateful for the confidence she has always had in my ability to do … well, almost anything! Aritha van Herk has also had a longtime connection to two of the other authors I’m listing on these two blog posts: Robert Kroetsch and Rudy Wiebe. This time around, I will be rereading a novel that was published by our mutual friend, Dennis Johnson, when he was the publisher of Red Deer College Press, a book she describes as geografictione, Places Far From Ellesmere.

Another author I met through being his sales rep is Tom Wayman, who published Woodstock Rising, a novel with Dundurn Press in 2009. A long-time teacher at the University of Calgary, Wayman is primarily known as a poet.

And the final author in this list is Rudy Wiebe (previously mentioned above in connection with Aritha van Herk). Weibe taught for many years at the University of Alberta, but I only learned of the author and his work when I began selling books in Calgary in 1978 and realized what an important literary figure he was in the west. I know him best for his books The Temptation of Big Bear (winner of the Governor General’s Award for Fiction in 1973) and The Mad Trapper, a novel about Albert Johnson who in 1932 became the most notorious criminal in North America, the object of the largest manhunt in RCMP history. (I have a copy of the original M&S edition from 1980 and the re-issue by Red Deer Press in 2003.)

Our own Griz when he was a kitten (he’s now 13 and no longer fits on these shelves …) checking out my Bequia library of books. One of those books by Cormac McCarthy on which Griz is perched is a rare signed edition (rare because McCarthy is known for seldom signing books or doing any promotion) that was very generously given to me by a fellow Canadian sales rep. 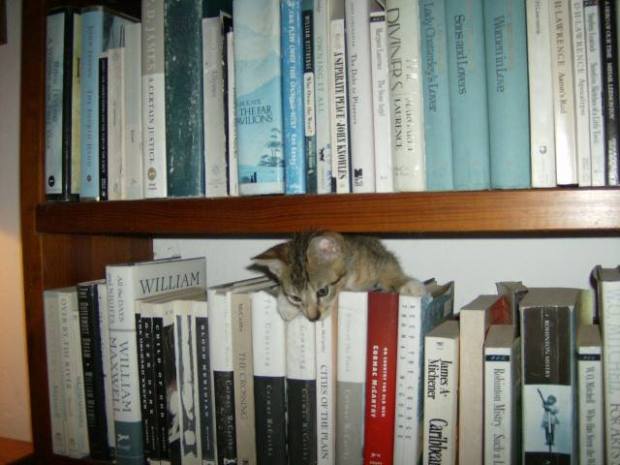