Since I’ve been talking and working with a couple of newly published authors recently, and have written guest posts and given talks on getting your work published, I thought I’d have a look at the process I went through. So I’ve hauled out this blog post I wrote in the early days, when actually seeing my writing in print (these were pre-eBook days, folks!) was still only a pipe dream, but a dream that was shared with many talented friends. Here’s where the design ideas began forming for my first novel, Island in the Clouds, and how an initial concept became the reality. I never did find a traditional publisher interested enough in my manuscript, so I self-published instead and was able to work with that original idea Jenny and I developed a few years before. I have always been pleased with the final result and constantly receive compliments on it! Full credit goes to my friend, Jenny Ryan!

I was chatting online with Jenny Ryan this morning – she in Ottawa and me in Calgary. It’s been too long a time! We first met online while taking the Ryerson Publishing Certificate courses, and have only met in person once, when we were both in Toronto. We hope to meet again this summer, in Toronto, but in the meantime, we caught up today on all of the various things that are happening in our lives right now.

Jenny has always been a terrific designer – she’s a natural at it – having a good eye for cover design even during that first course in Trade Publishing, when we were members of the same “publishing team” set with the task of developing a new list of books for our final assignment. Since graduating, Jenny went on to form a design business, Copper Canary Publishing Services, but now works as a freelance designer. She’s been along with me, almost since the beginning, for this crazy write-and-get-the-damn-novel-published ride I’ve been on, and is a constant source of ideas, comments, criticism, and encouragement the entire time.

I remembered recently that she had also designed a cover for my first mystery novel, Island in the Clouds, just for fun and using a photo I had taken. Here it is … 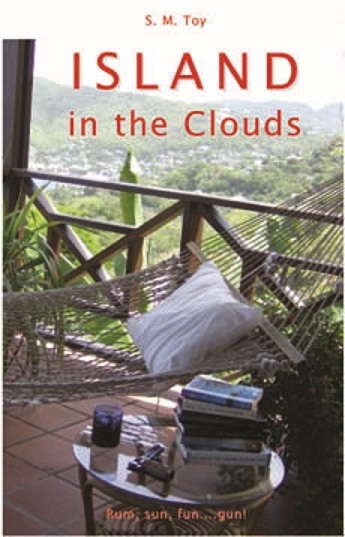 At that time, I was planning on using my initials for my writing name – until another editing friend pointed out the rather unfortunate double entendre presented by the juxtaposition of those initials with my last name. So now I go by Susan M. Toy instead, there being other SusanToys out there in the world, with a couple of them also being published authors. Yes, I too was surprised by that discovery. Which is why we should all google our names. And why I must now include my initial.

But I still love this particular cover design, and Jenny and I did have fun working on it together. Just as any good publisher/writer relationship should be!

And while this novel may never be published, let alone that this particular cover design be used if I do find a traditional publisher, it makes the entire publishing dream feel as though it’s one step closer to reality.

And dreams do have a way of coming true, sometimes! Here’s the final cover (but with a slightly different photo taken by Dennis). It’s all Jenny’s design though, front and back! And that was Jenny’s idea to add the #1 at the top of the spine, too. To keep me working on the rest of the series … Ahem!