Keeping with my Stampede theme, since the annual Calgary Stampede – which is celebrating its 100th Anniversary this year! – is still running until Sunday evening, I’m recommending a book of horse cartoons that was recently published by Dave Elston of Calgary, and a novel for teens written by Hazel Hutchins of Canmore.

I know some of you hockey and sport aficionados will be scratching your heads, saying, “Hey, isn’t he the guy who used to be the Sports Cartoonist??” During the 90’s, Dave’s cartoons were syndicated in local Calgary newspapers as well as national and North American publications, and featured on TV on Hockey Night in Canada and TSN. When he retired, he became manager of horse stables west of Calgary and, after years of observation, he has now put together a collection of horse cartoons that get at the very essence of equines – as any horse lover will completley understand and agree! 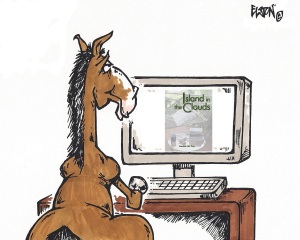 Since Dave’s book is really just for viewing, I thought I would include another this week for your reading pleasure, so I suggest Hazel Hutchins’ book for teens, After, in which horses figure greatly. Hazel grew up on a farm east of Calgary, in Strathmore, Alberta, and has been a rider all her life. She definitely “gets” Dave’s cartoons! In this novel, two teens lives are connected by a shooting at a local convenience store. While the book was written for teens, it is equally appealing to adult readers.