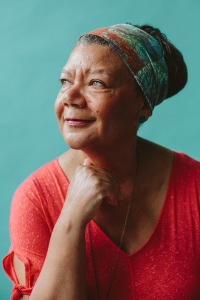 Cheryl Foggo is a multiple award winning author, playwright and filmmaker, whose work over the last 30 years has focused on the lives of Western Canadians of African descent. The 30th anniversary edition of her book Pourin’ Down Rain: A Black Woman Claims Her Place in the Canadian West, has just been updated and released by Brush Education Press. It is also available as an audiobook read by acclaimed Canadian actor Karen Robinson through ECW Press. Cheryl’s other books include two young adult novels, One Thing That’s True, (1997, Kids Can Press) and I Have Been in Danger (2002, Coteau Books) as well as a children’s picture book, Dear Baobab (2011, Second Story Press).

She has also been published in dozens of anthologies, most recently The Black Prairie Archive: An Anthology (2020, WLU Press, edited by Karina Vernon) and Calgary Through the Eyes of Writers (2018, Rocky Mountain Books, edited by Shaun Hunter).

She recently directed the short film Kicking Up a Fuss: The Charles Daniels Story. Her full length National Film Board documentary John Ware Reclaimed will be released this fall.

Cheryl Foggo’s play, John Ware Reimagined, won the 2015 Writers Guild of Alberta Award for Drama and was produced most recently at Workshop West Theatre Company in November, 2017. Also in 2017 she was recognized by the YWCA as one of 150 outstanding Calgary women. She is a past recipient of the Sondra Kelly Screenplay Award from the Writers Guild of Canada. In 2014 she co-produced Alberta’s first Black Canadian Theatre Series with Ellipsis Tree Collective Theatre Company.

I first met Cheyl Foggo in Calgary when she published her children’s picture book, Dear Baobab, with Second Story Press, which I had been representing. I displayed this book for her at library conferences through my promotion business Alberta Books Canada. I love Dear Baobab! Here’s a promotional trailer from the publisher:

The 30th anniversary edition of Cheryl Foggo’s landmark work
about growing up Black on the Canadian prairies
Published by Brush Education Inc.

Cheryl Foggo came of age during the 1960s in Calgary, a time when a Black family walking down the street still drew stares from everyone they passed. She grew up in the warm embrace of a community of extended family and friends, with roots in the Black migration of 1910 across the western provinces. But as an adolescent, Cheryl struggled against the negative attitudes towards Blackness she and her family encountered. She struggled against the many ways she was made to feel an outsider in the only place she ever knew as home.

As Cheryl explores her ancestry, what comes to light gives her the confidence to claim her place in the Canadian west as a proud Black woman. In this beautiful, moving work, she celebrates the Black experience and Black resiliency on the prairies.

What Cheryl Foggo is working on now: Cheryl is working on a book mapping Calgary’s Black history and communities from 1880-1960 and a new book about John Ware that will conclude her trilogy of works (play, film, book) on his life and legacy.