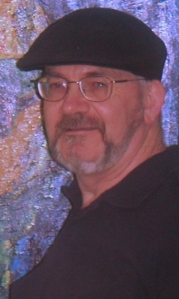 Blaine Greenwood, born in Viking Alberta 1951, is an educator by profession – with a career spanning from classroom teacher to museum educator and event planner. It is from this foundation that Blaine’s poetry has come to reflect his interest in psychology, history and spirituality. His verse has been described as “dark, homespun, sensual, rich with images

Blaine was one of the Coordinators of MOST VOCAL Poets Society. He was until very recently one of the artistic directors of Lotos Land spoken word / poetry venue at Fort Macleod Alberta’s South Country Fair and a past main stage performer. He is currently the DJ for CKXU’s Not Your Mother’s Poetry and as that show’s host, participated in 100 Thousands Poets for Change event 2013 – 2015.

The title of Blaine’s first chapbook Walking Naked Down the Street describes the experience of a writer baring his soul to the public as well as some of Blaine’s earliest attempts at poetry. Blaine’s first book was Black Cat in the Shadows. Second to be published by Ekstasis Editions The False Mirror is Blaine’s collection of prose poems about Matisse, Magritte and Dali. There are at least fou more manuscripts in various stages of writing and editing.

Blaine holds a B.Ed. and Diploma in Educational Media from the University of Alberta and lives in Lethbridge, Alberta with his wife, Dee.

I met Blaine Greenwood when the first Lethbridge Word on the Street Festival was being organized. Blaine interviewed me for a weekly show he hosted on CKXU Radio, Not Your Mother’s Poetry. Blaine has always been a very supportive and encouraging force within the Alberta poetry community.

Imagine three artists sitting at their easels about to represent the world around them. Take a subject as common as the human eye. Matisse just suggested the eye with two or three strokes of bold color and often hid his initials within those strokes. Magritte took the eye and turned it into a gigantic advertising poster – with clouds floating in the iris. And then there was Dali … the eye appears, suspended in mid-air over a sky, like a bruise glassy and weeping.

The title The False Mirror is taken from the painting by Magritte. Magritte’s work takes ordinary objects and turns them into thought provoking mysteries. Dali, an ultra-surrealist. is an artist of dreamscapes that seem to scream for psychoanalysis. Matisse, who appears to be more serene of the three, is an artist that uses flat patches of intense color and tends towards an economy of line and shape.

These three artists –Matisse, Magritte and Dali – having experienced many common life experiences, represent their views of reality in radically different ways. Hopefully what this collection of poetry will cause you to do is see reality not just with your eyes but your mind and your imagination as well. 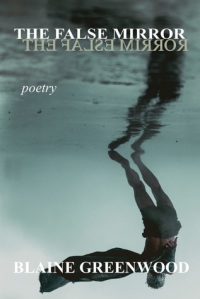 For more about Blaine Greenwood, please see his website.

Blaine Greenwood has been a guest previously on Reading Recommendations in Dec. 2015.

This site uses Akismet to reduce spam. Learn how your comment data is processed.