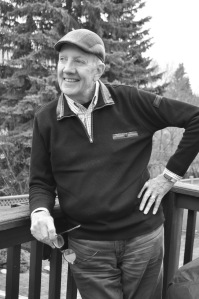 Brian Brennan is the author of sixteen best-selling books, most about the social history and colourful personalities of Canada’s past.

Born, raised, and educated in Dublin, Ireland, he has called Canada home for the past 50 years. Since 1974, he has lived and worked in Calgary, where he spent 25 years as a staff columnist and features writer with the Calgary Herald. Before that, he toured Canada as a professional musician and worked as a radio news announcer in Prince George, British Columbia.

Brennan has won numerous awards for his journalism, including two Western Magazine Gold Awards, the national Hollobon Award for medical reporting, and the Professional Writers Association of Canada Features Writing Award for a profile of Calgary mayor Naheed Nenshi.

He has also won awards for his books, including the first Dave Greber Freelance Writers Award for Romancing the Rockies, and the Petroleum History Society’s Lifetime Achievement Award “for making numerous contributions to the body of literature concerning the Canadian petroleum industry, including many focused on its colourful personalities and significant events.”

His interest in Canadian history was sparked in 1992 when he was assigned by the Calgary Herald to write a daily feature column about the lives of extraordinary individuals who had recently died. When he left the Herald in 1999, he revisited several of those columns to incorporate the stories into his books.

One of his most constantly sought-after books is Scoundrels and Scallywags, which sold more than ten thousand copies and topped the regional best-seller charts for more than eighteen months. A sale of five thousand copies, according to generally-accepted industry standards, qualifies as a best-seller in Canada. Doubling that allows a writer to move in the foothills of immortality.

When I was a bookseller in Calgary during the 80s, I knew of Brian Brennan as he was a journalist at The Calgary Herald. He did not begin publishing books however until after I had moved to the Caribbean, so it wasn’t until I returned to Canada in 2008 I discovered his by-then “backlist” of non-fiction publications. Then, when Brian began reissuing and publishing some of those earlier books himself, I got to know him in person, especially as he was writer-in-residence at the Calgary Public Library‘s Memorial Branch and had been commissioned to write the library’s hundredth anniversary celebratory history, The Calgary Public Library: Inspiring Life Stories Since 1912. I was asked to help with sales and distribution of the book.

I also had the opportunity to consult with Brian, as the library’s writer-in-residence, about one of my own short stories I’d been writing. I’ve been avidly following Brian’s re-issuing of earlier published books (that had gone out of print) in eBook format, and am enjoying his new books as he writes and releases them: A collection of interviews with celebrities, his memoir, and his very first novel, released in Aug. 2019 and available in eBook and print editions. I bought the print copy and read it immediately. Brian Brennan writes fiction just as well as he has always written non-fiction. This is an excellent story!

The Love of One’s Country
In Dublin, 1966, 23-year-old Jerry Burke quits his soul-destroying job in the Irish civil service to make a new life for himself in Canada and put behind him a dark secret from his republican past.
At the same time, he undertakes to find out what happened to his ancestor, Diarmuid Burke, who came to Canada in 1847, the most devastating year of the Irish potato famines.
Far as Jerry can discover, his ancestor did make it over to Canada, but why was he never heard from again?
The mystery finally starts to unravel in 1992, when Jerry learns that his ancestor kept a detailed diary account of his journey and that the journal has survived as an essential first-hand chronicle of this lamentable period in Irish history.

Brian Brennan is also a founding feature writer with Facts and Opinions, “a boutique journal, of reporting and analysis in words and images, without borders. Independent, non-partisan and employee-owned, F&O is funded by our readers.”

Brian Brennan was the sixth author I featured on Reading Recommendations back in Nov. 2013 and has been a guest on the blog a number of times since then.