By islandeditions on December 8, 2019

Anne Sorbie is an author, editor, and creative writing instructor.

Her fiction, poetry, essays and book reviews have been published by The University of Alberta Press, Frontenac House, House of Blue Skies, and Thistledown Press; in magazines and journals such as Alberta Views, Geist, and Other Voices; and online with Brick Books, CBC Canada Writes, Geist, and Wax Poetry and Art.

Her first collection of poetry, Falling Backwards Into Mirrors, was released by Inanna Publications in October 2019.

As a past editor of Dandelion Magazine and as publisher at Skyview Press, Anne has combined her love of visual and written art to create both periodicals and chapbooks.

This year, along with writer, Heidi Grogan, Anne will co-edit the (M)othering Anthology for which you can find more information on her website.

Anne has lived in Calgary since 1973 when her parents immigrated there from Cumbernauld (near Glasgow) Scotland.

Anne Sorbie first approached me for help with promoting her books on the advice of Calgary poet and professor, Tom Wayman. As well as my assistance with her promotion, Anne was also a big help to me when it came to the literary salons I was, at that time, preparing to organize. Anne jumped in and offered to create and publish, under her imprint of Skyview Press, limited quantities of chapbooks for each salon that could then be sold. The proceeds of those sales all went to the authors who had participated in each salon.  Anne also hosted one of those salons at her own home. Her enthusiasm for this series and for the promotion they generated for all the participating authors was greatly appreciated! I still have all five chapbooks she published, and most of the authors signed their contributions in my copies. What a terrific keepsake! And here they are: 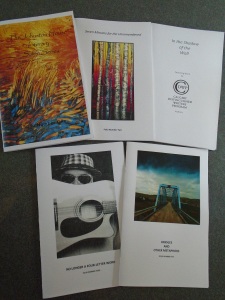 Falling Backwards Into Mirrors is a book that merges poetry and memoir. At the same time, it is a collection grounded in the body, naked and spare, wounded and wonderful. Through vivid, sensual images that evoke feeling, the speaker embraces the naked architecture of her own flesh and bones. In moments of give and take, this healing journey echoes the kind of deep explorations once undertaken by Adrienne Rich and Sylvia Plath. After a fall from a boat, water, distortions of light, and the blur of close reflection inspire the speaker to question the consistency of her own surface. She is hamstrung, literally and figuratively. She can’t stand unsupported. She can’t walk. She can’t sit. While supine for long stretches of time, her mirror becomes a vehicle for metaphor, for seeing, for reflecting, and refracting. Falling Backwards into Mirrors begins with a sudden trauma and moves forward as the surface of the speaker’s skin becomes like vellum, and landscape and love, family and community are grafted to hope.

What Anne is doing now …

In addition to Falling Backwards Into Mirrors, I published a chapbook called Songbook for a Poet this year. The backstory is on my website: 26 short poems, 13 by Robert Kroetsch and 13 responses by me, with the permission of his literary estate.

I’ve also been working on an anthology called the (M)othering Anthology this year with Heidi Grogan, which is now with a publisher. 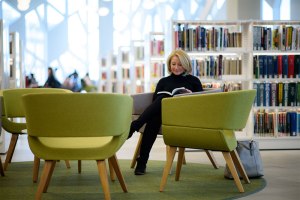 For more information about Anne Sorbie, her books and writing, please see her website.