By islandeditions on December 7, 2019 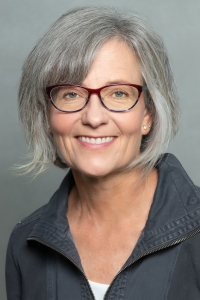 Barb Howard has been President of the Writers’ Guild of Alberta, Writer-in-Residence for the Calgary Public Library, and editor of FreeFall Magazine. Before she took up writing full time, she was a lawyer, a probation officer, a cafeteria worker, a canoeing instructor, a camp counsellor and a chambermaid (all of which figure in her fiction and nonfiction). She currently works as the Calgary writing mentor for The Shoe Project — a literacy and performance workshop for immigrant women, and is on the Board of Directors of Calgary Arts Development.

Barb’s short story collection Western Taxidermy won the Canadian Authors’ Association 2012 Exporting Alberta Award and was a finalist at the International 2013 High Plains Book Awards. Her work has been shortlisted 4 times for Alberta Literary Awards, including twice in 2012, and she won the 2009 Howard O’Hagan Award for Short Story. Barb’s fiction and nonfiction has been published in magazines, journals, and anthologies across Canada including Grain, The New Quarterly, The Dalhousie Review, Room, Alberta Views and Canadian Lawyer.

In addition to Western Taxidermy, Barb’s book-length works of fiction include Notes For Monday, Whipstock and The Dewpoint Show. She is co-editor of, and contributor to, the 2012 nonfiction anthology Embedded on the Home Front: Where Military and Civilian Lives Converge.

As with a number of other Calgary-based authors I’ve come to know, I met Barb Howard through Betty Jane Hegaret. Barb came on board from the beginning when I first set up author promotions through Alberta Books Canada, and during that time she took part in two of the literary salons I organized in Calgary, even hosting one of these at her home. Her quick wit and laughter definitely come through in her writing, which is a pleasure to read. Aside from being a an active and essential member of the Alberta writing scene through her mentoring, teaching, editing, and support of fellow writers, Barb Howard has also become involved in The Shoe Project, as she briefly mentions in her bio above. If you have not heard of this initiative, I urge you to look at and read through their website. (And I see 3 other authors in their list of mentors who I had planned to promote on this blog!)

Western Taxidermy is a 2012 short story collection that was a best seller when it came out and has climbed back onto the list several times since then — most recently on the Calgary Best Seller list in May 2019. Five of the stories in this collection have won awards or been finalists in competitions, including “Breaking the Mould” which was one of three finalists for the 2012 Writers’ Guild of Alberta Howard O’Hagan Award for short story. “Mrs. Goodfellow’s Dog”, also in this collection, won the 2009 Howard O’Hagan Award for short story.

Alberta Views Magazine, January/February 2013. “…It is this mix of satire and poignancy that makes Howard’s collection so attractive. These stories are funny, sardonic, smart and often reach for the grotesque. They are also compassionate and moving. Howard makes fun of human folly and commiserates with it too — and she best makes fun, perhaps, of our pretensions and delusions …The language appears effortless — you devour these stories and feel sorry when they end…[Barb Howard] is a comic voice like that of Atwood or Bill Gaston or Lynn Coady — making us laugh, and cringe, at the world and ourselves.”

What Barb is up to lately …

I have a new story coming out with the Loft 112 Long Lunch Quick Reads series in June 2020. In nonfiction, I am writing more about law and justice items these days. I’m especially happy with an essay in The Green Bag — “an entertaining journal of law” out of Washington, DC.

I’m happy to have a new 3-minute story in the short story dispenser at the Calgary Central Library. If you can’t get to the dispenser but want to read the story you can find a link to it at my website. I was at the amazing new Calgary Central Library and had a chai latte at Lukes while reading a “dispensed” 3-minute poem by Robert Frost…and I thought about how Robert Frost surely couldn’t have foreseen any of it. 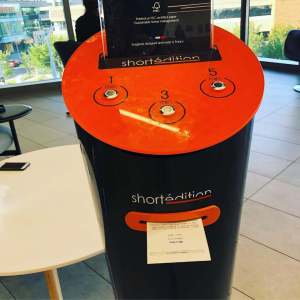 For more information about Barb Howard, her books and writing, please see her website.

Barb Howard was also a guest on my Reading Recommendations blog on Feb. 18, 2014.

This site uses Akismet to reduce spam. Learn how your comment data is processed.