Blood in the Water – with special mention of Bequia!

Tim Baker is a thriller/suspense writer, originally from Rhode Island, who now makes his home in Flagler Beach, Florida, where his series of nine novels is set. Tim is also a DJ on local Flagler Beach radio station, Surf 97.3, that we can pick up online here on Bequia – or anywhere else we happen to be in the world. 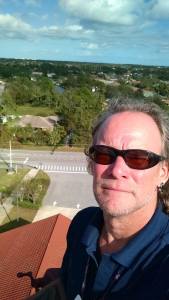 Tim was one of the first authors I promoted on my blog Reading Recommendations. And I’ve been reading and promoting his novels ever since. As he has done for me. (More importantly, he’s kicked my butt to keep me writing and publishing and I thanked him for that “encouragement” on the Acknowledgements page in my latest novel.)

Tim also shouts me out on his radio programs, mentioning that Dennis and I are listening from Bequia, and playing our favourite music.

I’ve had the great pleasure to beta-read several of Tim’s novels before they were published, and sometimes he even listens to my advice! I read Blood in the Water early last summer and offered my suggestions. Tim ePublished the book in September then printed copies shortly after that. I’ve been in the habit of ordering all print copies from Tim directly, so he signs them to me, and these books are now shelved between Jane Austen and Nick Bantock on the top shelf of my Wall of Words in the Bequia house. Tim offered to mail this new book to me on Bequia, since I’d already left Canada when it became available. I told him it likely would take forever to arrive/or never arrive at all, but I was surprised when the parcel was here within three weeks. Possibly a new record in mail delivery to this little corner of the Caribbean?

Anyway, once we did receive the book, Dennis claimed it to read next, since I had already read the book in beta format. Imagine my surprise when Dennis finished reading yesterday and said, “It was pretty neat that Tim mentioned Bequia in this book.”

He flipped through the end of the book and pointed to this exchange on p. 183:

“So what will you do now?” Val asked.

“There’s an island in the Grenadines called Bequia. I’m thinking of opening a dive shop there.”

(Reprinted here with permission of the author!)

When I contacted Tim to tell him of our discovery, he said he’d added that after I had read the book as a little surprise. Not only was I surprised, but I was also quite chuffed with this new connection between Tim and me and the books we write.

Not that Tim’s characters haven’t already visited Bequia … In my contribution to Path of a Bullet, an anthology of short stories by Tim and writer-pals that he published in 2014, a few of Tim’s recurring characters, including Ike, visit the island of Bequia. Bequia Blues was written to bring Tim’s characters together in the setting where my novels take place. It was a lot of fun to write!

So … Did Dennis enjoy the book? Here’s his review:

(He is an engineer, after all, and a man of few words, some of the time. Tim appreciated the comment when I told him.)

As for me, I thought this was the best novel of everything Tim has written – and I’ve enjoyed everything that I’ve read. But that was my conclusion long before our discovery of the mention in it of Bequia! Thanks, Tim! Now it’s the BEST BOOK EVER!!!

Well, maybe I exaggerate, but I do highly recommend this, as well as all of Tim’s books. Oh, and you can’t go wrong listening to Tim’s radio programs while you read, either …