Welcome to My Virtual Bookstore!

During the 80s I worked in a Calgary bookstore that didn’t really “do” the Christmas thing. We sold philosophy (Eastern and Western), books on math and physics, Eastern religions, stacks of the I Ching (the Princeton University Press grey-dustjacket hardcover edition), books for gays and lesbians (looong before anyone else had “gender” sections, when stores were still being “busted” for carrying so-called “obscene” literature – for instance, we sold many, many copies of Armistead Maupin’s Tales of the City series), armchair travel rather than travel guides, only vegetarian and macrobiotic cooking in the cookbook section, none of the big bestsellers or even books for children. But we did stock new age and progressive music … on vinyl. The fiction section was one long wall, packed, floor to ceiling, with a ladder to access the nether regions. That section wasn’t divided into genre or nationality either, but was alphabetized according to authors’ last names. So, Canadian authors all lumped in with everyone else. And we had everything that was really good, published in English – except, as I said, the bestsellers.

What I loved about this place at Christmas time, besides the lack of hype and frenzy surrounding buying (and the store trying to make a buck out of the season) was our customers. They were a loyal bunch we usually saw at least once a week anyway throughout the rest of the year, people who were serious readers, many of them authors, as well, who read to live and lived to read. Some of them are still my friends, online at least, and I continue to promote their writing. These were people who would buy a couple of cups of coffee at Bagels and Buns across the street and come in to chat with us about the latest books in whichever area they were interested, or talk about their own writing, or just sit in one of the big upholstered chairs in the window with a cat (either Watson or Salinger) on their lap.

I’m always reminded of this store every Christmas when I hear of people essentially freaking out over having to buy gifts for everyone on their lists. At that store, the week before Christmas Day, one particular customer would walk in, stop in front of the sales desk, slap his hands together and say, “There! I’ve finished shopping for everyone else – now it’s time to shop for ME!” 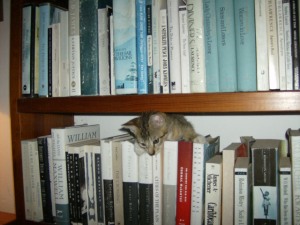 So, in this spirit, for those of you who are ready to buy a special gift for yourselves – and because I now no longer work in a physical bookstore – I am happy to present to you a virtual selection of books and authors for you to gift yourselves this year.

This virtual bookstore even boasts resident cats, one of them a thoroughly serious critic who eviscerates whatever she doesn’t like … 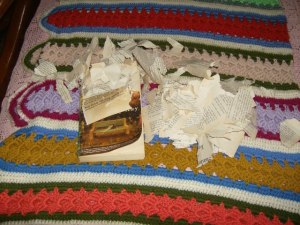 Here are my Reading Recommendations Authors – more than 250 of them – to choose from. Enjoy!! (And just like the fiction section in that old bookstore, these Authors are from all around the world! But unlike the store, there are a few Authors who write books for children among them, as well, and you may order most of these books in either digital format or print!)

While you’re “browsing” you may wish to listen to some of the more popular music we sold in the store: Windham Hill albums … George Winston’s December and anything by Liz Story.
Penguin Cafe – their first album, Music From the Penguin Cafe and one of my favourite songs, The Ecstasy of Dancing Fleas.