When Words Collide – a recap

Calgary was the place to be Aug. 14-16, if you had any interest in books, whether reading or writing or publishing them – and you’d had the forethought and good fortune to register well in advance. The 5th edition of the When Words Collide Conference had sold out almost two months before, proving once again that this is one of the hottest Reader Cons in Canada.

I did not attend this year, but was there for the first two conferences, as part of the vendors’ market place (displaying books for authors I was promoting through Alberta Books Canada) and as a presenter. I could tell from the very beginning that this particular reader con would catch on. There was a certain energy I had not felt at other conferences in which I’d participated. And what I enjoyed most was that this was an all-inclusive con, so all genres were represented, and self-published books were just as welcome as those traditionally published. 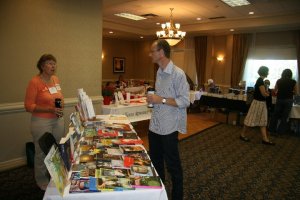 Speaking with author, Richard Harrison, at the first WWC.

Last week, I went back to look at the blog posts I’d written when I was preparing to attend those first two conferences, and I discovered the list of authors I had planned on promoting in 2011. I was delighted to discover that many of these authors have since been promoted on my new-ish blog, Reading Recommendations! And some of those RR– promoted authors were also going to be taking part in this year’s WWC. So I decided to write this blog post about When Words Collide and ask a few of the authors who I have promoted on my blog to tell us something about what this conference means to them.

Receiving some “tropical” support for my own novel at the second WWC.

Also, at that second WWC I attended, I met a Klingon who subsequently read and enjoyed my novel … so you just never know who is going to show up at When Words Collide!

(All authors’ names are linked back to their original promotion on RR.)

Axel Howerton, Author and Publisher – I have attended, and been a participant in, many conventions, festivals and author/creator events in my time–When Words Collide is, hands down, the most edifying, most inclusive, and most enjoyable one that I have ever been a part of. It is my personal most-wonderful time of the year.

Adria Laycraft, Author – Often dubbed the Canadian Readercon, WWC continues to up its game each year. It’s a fine mix of lecture and panel, workshop and pitch session, launch and special guest interaction, with quite literally something for every book lover in every genre.

Brian Hades, Publisher at EDGE Science Fiction and Fantasy – WWC has turned out to be one of the most important meetups for genre writers and publishers in Canada. It is an absolute ‘must’ for the calendar and better than some of the bigger and more expensive writer conferences out there. The community is strong and supportive with a crossover of genre writers gleening insight and experience from each other – not only in the art of writing but also within the business of writing. It is the conference/festival/meetup that I look forward to attending every year (and I attend quite a few). May both writers and readers continue to come.
(Many authors published by EDGE have been promoted on Reading Recommendations since the beginning, thanks to Brian’s support of the blog.)

Marie Powell, Author – WWC is the best conference for working writers that I’ve attended. It offers lots of opportunities to hear and participate in inspiring panels and workshops, catch up with old friends, meet new ones, and talk writing with so many talented writers. I gained confidence in my writing through the Live Action Slush events and Blue Pencils with skilled editors, and had the chance to practice pitching with supportive writers (like you, Susan.) Last August, I pitched Hawk four times, three in formal pitching sessions and once on the trade show floor, and had invitations to send the manuscript from each one. The result was a contract with the supportive and incredible Naomi Davis of Inklings Literary Agency, a two-book contract with Five Rivers Publishing, and the expert editing of Dr.Robert Runte. We came full circle by launching Hawk at WWC this year, and I took the opportunity to give back by participating in panels on pitching and research. I can’t say enough about this conference. Thanks again to Randy McCharles and all the WWC volunteers!
(I met Marie at the first WWC and have followed her efforts to publish her manuscripts over the time since. I was thrilled that Marie launched her published novel at this year’s conference! Watch for her promotion coming up soon on Reading Recommendations.)

And, finally, a word from Fearless Leader, the man responsible for coming up with the idea of When Words Collide in the first place!

Randy McCharles, Author and Director of WWC – I attend social events for the people. Chatting with old friends. Meeting new ones. Literary events are no different. Yes, I get to discover new authors and top up my reading list. And I get to listen to panel discussions and presentations on topics as diverse as how to kill fictional people with undetectable poisons to the latest trends in fiction. And I can attend workshops on how to use a microphone properly or put on a successful autograph signing at Chapters/Indigo. And pitch a manuscript to an agent or acquisitions editor. Or… There is no end of things to do at literary events, especially at the When Words Collide Festival for Readers and Writers where there are 10 concurrent tracks of programming. 10 choices of what to see or do each and every hour over the entire weekend. But, really, I do go to see people. My people. People who love books. Some of my people I see regularly; they live in town or nearby. But the mood and atmosphere are so much better while at a well-attended literary event. Others I see less often except on Facebook. When Words Collide is often my best chance to catch up.

When Words Collide was conceived in the fall of 2010 when I was chatting with some friends at the final year of one of Calgary’s annual genre events. “Now where are we going to hang out and talk books?” someone asked. “Let’s start our own event,” I said. “And let’s make it just about books. All kinds of books.” It took us very little time to come up with a name, and 10 months later saw the first annual When Words Collide festival. We’d hoped 150 people would be interested in our rather unusual event, a multi-genre festival set in a hotel. Over 250 people came out, many from across Canada and even the US. The best attended sessions were “Festival Guest Keynotes”, “Turning History into Fiction”, and “Dead Men Do Talk”. Word spread, sending attendance skyrocketing each year.

This, our 5th year, saw a sold out festival with 650 people attending. While being sold out means we have to turn away some who would like to attend, getting too large would make our event impersonal. I said at the start that I attend social events for the people. Large events, like the Calgary Comic Expo and the World Science Fiction Convention (which is taking place even as I write these words) are great, but I no longer attend them. Why? Too many people. While it is possible to find your peeps in a zoo-like crowd and hang out, it is simply that much easier at a smaller event. If you check out my NEWS page on my website, you’ll see a list of literary events I am hosting or attending (so far) over the next year. When Words Collide is the largest of them, and it won’t get much larger. 2016 will see the same attendance cap of 650.

What makes When Words Collide so popular? You can guess my answer: the people. That’s right. This year over 200 attending authors, editors, and experts in various fields volunteered their time and experience to share with the literary community. Dozens of volunteers also put in their time and skills to make the festival happen. Unlike many charitable and non-profit organizations, no one working to make our festival a success is paid. Everyone contributes as a member of the community because they love books and people who read books.

I also feel that I must make special mention of the staff of the Delta Calgary South Hotel. I have worked with a number of hotels over the years to put on events, and had long discussions with organizers working with other hotels, and never have I seen such helpful and cheerful staff. The hotel is a joy to work with and I have to admit that I spent big chunks of time chatting with staff rather than festival goers. So shoot me. It’s all about the people.

And there it is. I love books. And I love book people. You can find both at When Words Collide.

Thank you to all the Reading Recommendations Authors who contributed to this blog post. And a special thanks to Randy McCharles for continuing to present everyone with such a dynamic and successful event every year.

This all has me thinking I’d be wise to join in again next year and set up a display at When Words Collide of some of the many Alberta, Canadian and international Reading Recommendations Authors I’ve promoted. Hmmm … definitely worth considering!