I first met Nat and Betsy last year when they were vcationing on Bequia. Robin Coles, an author I promoted on my blog Reading Recommendation, had put us together on Facebook, so I invited Nat and Betsy to visit my house when they arrived on the island and we have been in contact since that time. Nat posts many photos to Facebook and that’s what led me to ask if he’d like to write about Bequia in this series of guest posts. Besides, he also brought a copy of Anne Lamott’s Bird by Bird to reread – definitely an author serious about his writing!

All right, I admit it! There’s a big part of me that adheres to the latter half of the old question: “Do you eat to live or live to eat?” Much as I’d like to say I don’t really care, that I’d just as soon take a pill or drink some one of those disgusting green slime protein punches people on-line are always swearing by, the deeper more honest part of me can’t wait for the next good meal . . . or, dare I say it, snack! 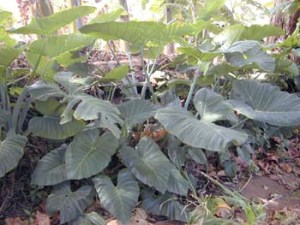 This confession leads me to want to share what I consider a best kept secret about Bequia – the food! From the first time I stumbled on a bowl of hot zesty callaloo soup to the day I discovered smoked fish salad or that plate of poisson cru, I simply can’t wait until I find the next tempting dish in some unexpected corner of this ever-surprising island of treats.

The first time we ate callaloo soup was at the Sugar Reef in Industry. I think the sign out front said Dawn’s Creole Café at the time and we stopped there on our first tour of the island by taxi thanks to Blinks, or the Fat Man, who introduced us to Dawn. Her callaloo soup had some meat in it and was seasoned perfectly. It was simply fantastically delicious, savory, spicy, thick and memorable.

Next time we went back there almost 5 years later on the way home via Bequia, the place had changed hands, been all gussied-up, and Dawn was gone! We were shocked and severely disappointed. When we asked what had happened to her the new owner told us he had tried to get her to stay on and continue cooking for him but for some reason they couldn’t get along and she left. He didn’t know where she’d gone. 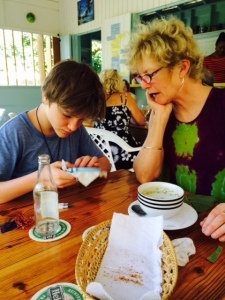 It took us two years but we finally found her again. She’d opened her own little 10 x 12’ sunny airy brightly colored little building down at the very end of Lower Bay Beach. I think she told us her son built it for her. God, we were happy to find her again! Just today we went back there for lunch and I ordered a bowl of callaloo soup and a plate of smoked fish salad and thought I’d died and gone to heaven. The soup was just as good as I remembered/imagined it to be, filled with chunks of ham and thick with savory vegetables, spices, and, of course, callaloo galore. Thank heavens Dawn is still cooking. I hope she never dies and if she does I sure hope she leaves her recipe for callaloo soup for someone else to cook, though I can’t imagine it could ever be quite the same. And her fresh fish cakes are Betsy’s favorite…not to be missed! Very crunchy and s-picey…..mmmmmmmm!!

My other favorite Bequian eatery is Fernando’s, or ‘Nando’s as it’s often called. We discovered Nando thanks to some sailing friends who we first met when we returned here by boat in 2011. On his chalk-board menu Nando has written “To our sailing friends on 2015, Fair Winds!” Those words ring true; only the date changes. In the WC the walls are covered with drawings from his school-kid friends extolling the wonder of Nando’s cooking. Our cruising pals told us we couldn’t miss an evening with Nando and how right they were. Now, whenever we arrive in Bequia the very first place we go out to eat is Nando’s, high on the hill at the inner end of Lower Bay.

Fernando is the owner and chef and his specialty is fresh fish. There is no menu although usually there are a couple of offerings written on the chalk-board which one of his two sisters, who wait on us with grace and style and care, will recite eloquently for you while your mouth waters at the mere sound of the words rolling off her tongue. Saturday night you can count on finding a bowl of goat-water soup in addition to whatever fish Nando happened to catch that day. You see, he goes out in the morning or late at night and drops a hook over the side of his boat and whatever happens to bite, be it snapper or mahi-mahi or blue crevalle or jack or maybe some sweet tuna or any number of other finned species; it doesn’t matter, that’s what we eat! Whatever Nando catches will be prepared to perfection; you can bet on it. And the goat water soup is succulent even though it sounds terrible. When I looked for a recipe on-line it talks about goat head, organs, and feet plus lots of water, maybe some bananas or yams, some taro root, some carrots, scallions, and habaneros with thyme…I don’t know, probably, like the callaloo, whatever strikes your fancy and I’m sure there are as many variations as there are Caribbean chefs who prepare it but all I can say is, at Nando’s it’s something special. You don’t want to miss it! And Nando always features the next on my list of hotspots as his dessert offering. 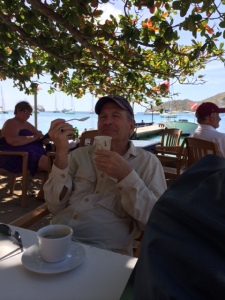 Maranne’s Ice Cream at the Gingerbread Café! If you are an ice cream fanatic, and Betsy and I are for sure, this is a spot you won’t be able to pass by without stopping and sampling a flavor or two then settling in by the harbor front with a double espresso and a small cup or a cone of this delicacy. My current favorite is the ginger spice. As the sign says: Not for the faint of heart! OMG, it’s a sweet-treat you won’t soon forget! So’s the lime, the nutmeg, the vanilla, the passion fruit….all good, you can’t miss at Maranne’s!

Upstairs at the Gingerbread you can count on a good spicy tuna rollup and their soups are pretty darn good too. It’s a lovely breezy spot to eat overlooking the harbor.

Up the hill in Spring sits the Firefly Café in the beautiful old sugar plantation house. We’ve had some wonderful curried roti there, fish, chicken, goat, your choice. And the pumpkin soup I sampled there the other day was the best I’ve had anywhere! We also had some good cold fruit soup there one day . . . I think it was watermelon and passion fruit . . . wicked good. 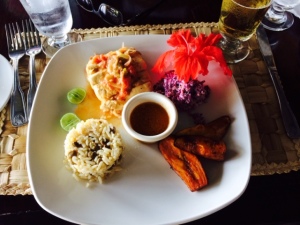 Even though Dawn is no longer there, you can get a good meal at the Sugar Reef. Whatever fresh fish is on the menu will be nicely prepared and the presentation is always special. Sitting there under the high-pitched white roof with your feet on the beach, surf rolling in, and the driftwood chandeliers overhead is always a treat.

I had an excellent poisson cru salad made with mahi-mahi on a bed of dark purple cabbage at the Black Pearl the other day and my pal, Ben, had some good fish and chips all washed down with a couple of cold Hairouns, the great lager from St Vincent.

One of our favorite spots to eat was Hendi’s, the four-table sand-floored bistro over in Hamilton half-way up the hill to the venerable stone Gospel Light Baptist Church. Last time we checked, Hendi was no longer serving. He told us his girlfriend, who waited on tables for him, had run off with another guy so he shut down the business. A shame because we really liked Hendi and he was a damn good cook. We’d sit out in his front yard under the sheet iron sun roof and sip on one of his special rhum punches while the chickens ran under the table and Hendi worked in the kitchen singing and preparing whatever struck his fancy. You had to call ahead and let him know what you might like to eat based on what he had available and then just show-up and he’d go to work. There was a little one-room bar out back where some of the locals from Ocar hung-out and the Christmas lights he hung round the place gave it a festive air. We miss this place and hope he finds another partner soon so he can open the restaurant again.

Back to callaloo for a minute. It’s also called amaranth and apparently originated in West Africa. It’s a dark green leaf vegetable akin to spinach. Sometime called taro or tannia or dasheen. Callaloo is the name for both the vegetable and the stew or soups made from it. There are many different variations, some made with coconut milk, crab, conch, lobster, ham, goat, chili peppers, onions, garlic, basically whatever the cook has on hand and whatever suits the palate. We’ve had many versions of it on Bequia, all tasty, but none, in my book, as good as Dawn’s. Now, go check it out for yourself and let me know what you think. Oh yeah, I also had a great conch stew at Da Reef, a favorite hangout just down Lower Bay Beach from Dawn’s. 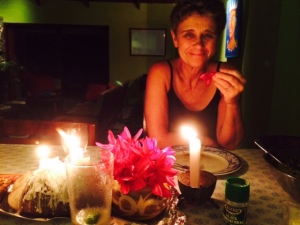 As Ludwig von Beethoven, that chef among musical chefs once said, “Only the pure of heart can make a good soup.” Bon Appétit, Bequia! 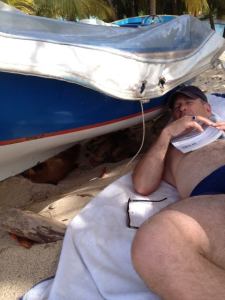 Nat Warren-White is an actor, drama therapist, writer, and executive coach who first fell in love with Bequia when he and his wife, Betsy, landed there in 2006 at the beginning of a circumnavigation aboard their 43′ South African-built cutter, BAHATI that you may read about here. In 2011, they stopped there again on their way home to Maine and, in fact, Bequia is the spot on earth where they “closed the loop/tied the knot” – joyfully completing their sailing journey round the world. Since then they have been returning every year and are learning to love and understand this special dot in the ocean more and more!