Gordon Cope was previously featured on Reading Recommendations and offered to write this new 3-part series about Paris.

In celebration of the publication of the 10th anniversary eBook edition of A Paris Moment, I am writing a series based upon Femmes Fatales of Paris.

Any compendium of Femmes Fatales of Paris must, of course, start with Mata Hari.

Born in the Netherlands in 1876, Margaretha Geertruida Zelle was the daughter of a prominent milliner. When she turned 18, she married Captain John MacLeod of the Dutch Colonial Army and moved with him to Java, where they had two children.

The marriage did not end well. MacLeod was abusive towards Margaretha, and openly consorted with an Indonesian concubine. One of the children took ill, and died. Margaretha left MacLeod for another Dutch officer and took up Indonesian dancing as a distraction from her worries. She adopted the stage name Mata Hari, Malay for ‘eye of the day’.

Margaretha returned to the Netherlands in 1902. The following year, she moved to Paris, where she eked out a living as a circus performer and exotic dancer. Her latter profession caught the eye of contemporary dancer Isadora Duncan, as well as Emile Guimet, millionaire industrialist and founder of the Musée Guimet, dedicated to Oriental culture. Inspired by Indonesian traditions, she crafted a dance persona based upon a Java princess of high-caste Hindu birth.
Her dearth of costume was what really captured the imagination of the Parisian public, however. During her performances, she would progressively shed clothing until she wore little more than an ornamental bra and arm bracelets. Travelling throughout Europe, she drew wide acclaim for her exoticism.

Eventually, however, the fame wore off, and critics increasingly characterized her as a dancer with little skill and excessive weight. By 1912, her career was largely at a standstill. She began to lean more upon her feminine wiles, becoming a consort with politicians, military brass and men of influence.

When the First World War broke out, the Netherlands remained neutral and, as a Dutch subject, Margaretha was allowed to travel freely between countries. Her movements soon attracted official attention, however, and she was detained by British Intelligence and interrogated in London. Scotland Yard concluded that she was a double agent for the French, but no charges were laid.

In 1917, the French intercepted German communications from Madrid that highlighted the activities of a German spy, subsequently identified as Mata Hari. British intelligence fed her the names of Belgian spies they considered to be double-crossing their German masters; one man was subsequently killed, proof to them that Margaretha was indeed in communication with the Germans. 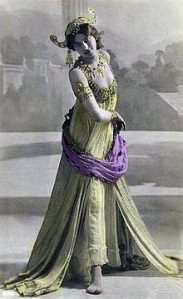 Margaretha was arrested in her hotel room on the Champs Elysees and placed in prison. During her trial, she was accused of passing on information to Germany that caused the deaths of at least 50,000 soldiers. Although no definite proof was presented by French or British intelligence authorities, she was found guilty. Mata Hari was subsequently executed by firing squad in the Chateau de Vincennes outside of Paris, and her remains donated for medical research.
Her story did not end there. When German papers were unsealed after fifty years, it was revealed that she was, indeed, a German agent under the control of the German embassy in Madrid. And, in a particularly bizarre twist to her legend, curators at the Museum of Anatomy in Paris discovered in 2000 that her head, which had been preserved and donated to the museum, had disappeared.

Gordon Cope also was a guest blogger of a 3-part series about the San Miguel Writers’ Conference. Here’s Part One.