Dear Writer … it’s not all about you, ya know! – a reminder

I was going to write a blog post about social media and how I’ve been paring down my use of it, because I’m finding it to be not all that social or the best media for me at the moment. After discussing with a fellow author how disappointing Twitter is (and she cleverly described T. as “like a 4-lane highway at rush hour with cars bumper-to-bumper. It makes me nervous”), I realized what bothers me isn’t not being able to navigate and use Twitter properly, but more the barrage of Tweeps who constantly tweet: Look at me! Aren’t I clever! Buy my book!

Now I’m not saying that I don’t do some self-promotion on there, but I do try to balance that with tweets of value to others, including promoting fellow authors. And I also offer, up front in my profile, what I am prepared do for other Tweeps. Most authors who have been following me lately have just listed their “bestselling” book that was recently published (how can anything be bestselling if it’s just been released? I ask), and nothing at all as to what value they bring to me in my following them. I reached the 2000 following limit the other day, so I’m now winnowing out those guilty people and looking for Tweeps who are truly interesting.

I’m not all about the numbers, you see. I’d rather have fewer friends/followers I can truly count on with whom I can have an actual dialogue on Twitter and Facebook. And no one is holding a gun to my head forcing me to use either Twitter or Facebook. If I don’t like what’s going on there, I can always use them less or just drop out altogether. No point in complaining about them, really.

So that, in a nutshell is my rant about social media.

But this had me thinking about another blog post I published, first on Aug. 16th, 2013, then reblogged on Oct. 24, 2013, and which I believe is due for a reprise here, because this all needs to be said until authors do get it and start promoting more than just themselves …

I completed a sentence that had been posted by a writing-related Page on Facebook: What I like most about writing is …

I answered with, “when a reader enjoys what I’ve written,” because that’s why we all write in the first place. Right? So readers will read, and be affected by, what we’ve written. The bonus comes when they tell us this is the case. If that’s not why we write then we might as well just maintain locked journals and diaries. Or burn everything we write.

I was the first to reply to this, so it wasn’t until I went back to the Page a day later that I noticed mine was the only comment that took readers into consideration. For the rest of the people posting – and there were very many! – it was all about them.

When I write The End.

When my writing goes well for the day.

When I sell a lot of copies.

You get the picture. It scares me that so many writers are that self-centred they can’t see the real value to writing anything is to move, to entertain, to persuade, to get a reaction, and just have their writing read. (And it doesn’t matter here whether the reader actually purchased a copy, downloaded it for free, or borrowed your book from the library – as long as they’re reading. We’re not talking about making big bucks from writing and that that should be the reason we write, because I think everyone realizes there’s very little money to be made from writing books. And, if you don’t realize that then I have a bridge in Brooklyn I’d like to sell to you … )

So we end up with articles like this by Michael Kozlowski on GoodEReader: Self-Published Authors Are Destroying Literature. ALL self-published authors are painted with the same brush, because too many are making nuisances of themselves. I have stopped following and friending any author who only talks about themselves and their own book in social media. I will not follow anyone whose Twitter bio is only about their own book and not about any of the benefits they can offer to me – like, that they’re a READER, or a librarian, or a bookseller or someone else with a vested interest in books in general.

Sure, I want to know you’re a writer, but I also want to know that you read and will promote books by other authors. I will be more inclined to look at your website, in that case, check out what you’ve written, and – here’s the clincher … Help you to promote that book of yours by telling my friends about it, if I enjoy reading what you’ve written.

Now we’ve come full circle as to why readers’ enjoyment in our writing should be of the utmost importance to all writers and authors. If readers like what they read they will share it with their friends. The very best promotion anyone can ever ask for is word-of-mouth, because it means our readers are endorsing us and want to share our work with their friends, and it’s not just us blowing our own horns all the time. Word-of-mouth is also the most flattering form of promotion, far better than any review in a newspaper most new readers will never see. And it gets rid of any perceived need to self-promote, ad nauseum.

This word-of-mouth business doesn’t just happen overnight, either, so I suggest that, along with restraint, writers and authors need to learn to be patient. I first published my eBook in Feb. 2012 and the print edition in June of that year, and I’m still finding new readers who haven’t previously heard of me or my book. But I’ve been quietly making connections here and there and one thing has been leading to another, so I’m very pleased with the readership base I’ve developed, and how many of those people have asked when the next book will be available. I keep writing, and I continue to publish the work of other writers and help them promote their work. And I’ve tried to do it in a way that, I hope, has been helpful to other writers/authors and their readers by not making it all about me and my book.

I’ve recently “met” online a couple of other self-published authors. (I read and enjoyed their books, wrote reviews, and heard back from them both. We’ve made a connection and are now discussing promoting and promotion and I believe some good things are going to be coming out of this that will benefit all of us.) I’ve made the suggestion to one of these authors that, if every writer/author out there were to help five others promote their work (so for every tweet about their own book they would tweet five times about five different authors) this would be a wonderful world! You must have read something recently that you want to talk about to everyone you know. Maybe you’ve discovered a new writer whose book you just couldn’t put down, or perhaps you have a writer friend who is struggling to get the word out, because they don’t have as many friends on Facebook as you do. It could also be an established author whose work you admire. Even established authors still need promotion, after all.

So I’m putting my money where my typing fingers are and am proposing to begin promoting five other authors myself. This was my business, after all, when I ran Alberta Books Canada. One of the authors I promoted then said that if I could find new readers for his writing he would be happy, so that became my mandate – finding new readers. At that time, I was working to promote many authors, primarily to libraries, and the authors paid me for displaying their books at conferences. What I propose now is to promote books by authors because it’s a good thing to do! If I promote these authors now, somewhere down the line someone else will promote my book. And all of this promotion will be done for free with no expectation of receiving anything in return. After all, what goes around, comes around. That’s Karma, man!

Please join me! (Readers, you too can get in on this idea …) If you know of a deserving book, tell your friends about it. Write a review, mention in your status update, Tweet about it. (As Tim Baker said in a recent blog post, Write a Review — Independent Authors Everywhere Will Thank You) Do that for five authors for a while. Then change over to another five authors. And continue. Your friends will be grateful for the reading recommendations. The authors will be grateful for the promotion.

And … it won’t be all about you any longer, so your friends will begin to return.

(Since Nov. 18, 2013, I have followed my own advice and began publishing a promotion blog, Reading Recommendations. Check it out!) 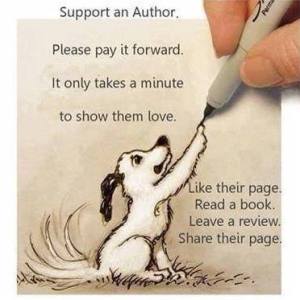