My friend Joseph suggested I read Going Solo: The Extraordinary Rise and Surprising Appeal of Living Alone by Eric Klinenberg. I had to wait a while for a library copy to come back in, but have just finished reading the book this morning and thought highly enough of it to want to share the information here. 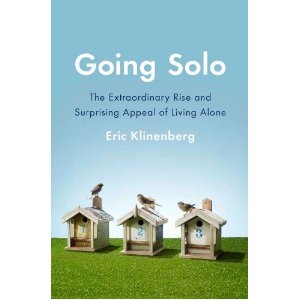 It wasn’t an easy read in places, but definitely an eye-opener for someone who has chosen to live on her own in Calgary, and at a time when she no longer has a guaranteed paycheque. The affirming part of the book was that – we who choose to live alone, or live alone due to circumstances not of our own making, are not actually “alone.” In fact, we are SO not alone, as there are more single people living alone in North America than there are families living as couples or as family units! We’re the majority. The disappointing information I learned about living alone from this book is how little support “singletons” receive in the scheme of things, with such a heavy emphasis on “family” in our society, and all the support and encouragement they recieve, and the very little recognition of the sheer numbers of people who choose to live on their own.

The book became downright depressing when the author discussed the many people he interviewed who live alone and suffer because of their lack of any supportive social system – friends and family members – who they can call on when they get sick, when they need help after losing a job, when they just need someone to talk with about their lives and problems. True, some choose to be reclusive and draw away from physical society altogether, but it’s amazing how socially connected many of us can be while maintaining our independence of living alone. The Internet and social media have certainly helped in recent years to extend our social networks well beyond apartment walls, and it turns out that single seniors are the fastest-growing group logging on and keeping up with their “friends” virtually.

The saddest statistics cited in the book were about the number of people who die alone in the United States every year, and whose bodies and estates are never claimed, because no family members can be found. There are actually people employed by government agencies who sift through all the papers and belongings left behind, trying to discover something about this person to connect them to a past. That’s probably one of the greatest fears of anyone who lives alone – to die alone. Very sad.

The book ended on a high note, though, with a discussion of people and groups in various places (mainly NYC and Sweden) where single living has been encouraged with the development of affordable housing that also offers a community for singles. Other cities, such as San Francisco, are creating independent living environments for the un(der)employed, the mentally ill, and those with substance abuse problems to come together in buildings that provide them with a chance to not only recover or learn to live with their problems, but also help with (again) feeling they are a part of a supportive community.

The last two chapters in the book got me to thinking about how I might be able to become involved in helping artists and creative types, especially – those who, like me, have been fortunate in finding temporary residences that they can afford on a meager income, but are not able to land (or maintain) a full time paying job, because they need to devote much time and effort to their art, whatever that art is. I’m still thinking about how this might be possible to accomplish. When at Queen’s, I lived for one term in a Science ’44 Co-op house, which was a great savings to me on the cost of living in a university residence. We lived in large houses with about 10-12 other students from all disciplines and years, and we were required to do some sort of work for the co-operative every week. I chose kitchen work and helped the full-time chef prep for meals. It was a great system, but then I moved into an apartment with a roomie the next term. I did keep in contact with the other co-operative students and all agreed it was more like living with a “family” than our residence experience had been. (Probably because we lived in a house, with a kitchen, shared bathrooms, and a living room, rather than in an apartment building-like residence.)

So any suggestions from out there as to how I might go about organizing something like this in Calgary for the benefit of artists and creative types are gratefully welcomed, accepted and considered.

In the meantime, if you are living single or are interested in this subject, do read Going Solo. Thought- provoking.

And also read a recent and related post written by Eugene Stickland on his blog, The Bicycle Reconsidered.